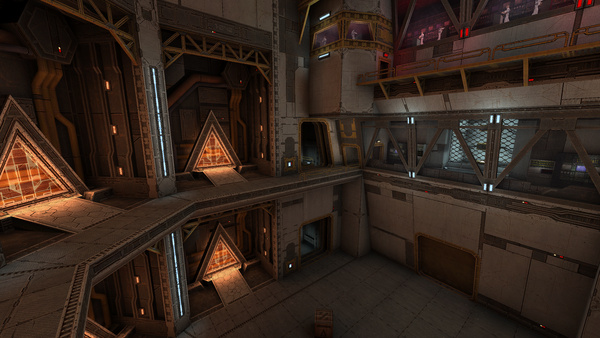 Alkaline calls itself “the ultimate Base mod for Quake”. I agree. Get it from the Alkaline web site or Quaddicted.

Note: My experiences are mostly from Alkaline 1.0. I haven’t had much of a chance to play with version 1.1, which adds four new levels and generally looks a bit more polished.

“Base” was one of the level themes in the original Quake levels. These were designed to look like military bases which have been corrupted and overrun by monsters. Each of the four episodes in Quake starts with a military base level, which ends with a slipgate that takes you to the rest of the episode. While the rest of the game has more of a medieval or gothic theme to it, the base levels are inspired by science fiction.

Alkaline flips this around—it throws away the fantasy parts of Quake and gives you a new set of thirteen sci-fi themed levels, with new weapons and enemies.

The era of realism in first-person shooters began somewhere around 1997.

By “realism,” I’m just talking about games like Goldeneye (1997) and Half-Life (1998). These games take some environmental cues from real life, with some fragments of real-world logic in their level design. Half-Life has a train you ride to work and a breakroom with a microwave. Goldeneye has security checkpoints with guards and chain-link fences with padlocked gates. You have objectives like finding lambda team, launching a satellite, intercept a nerve gase shipment, rescue hostages, etc.

By comparison, in Quake, you use the silver key to open the silver door, and the gold key to open the gold door. Your objective is to get to the end of the level. A “military base” level in Quake is nothing more than an aesthetic choice, and a choice of which monsters go in a level. The level geometry is chunky, with large polygons.

Alkaline has a few levels where the cold influence of realism creeps in. There’s an elevator that you repair by collecting circuit cards, a reactor core with coolant systems, and even a ground-level parking lot. Even if it’s not stated up-front, you might have a mission to complete, like shutting down a base or destroying it.

You can see a fair bit of influence from Half-Life, specifically, in Alkaline. You’ll not only see some level geometry with thin railings and realistically sized stairs, but you’ll even see scientists running around in white lab coats and recognize many of the Alkaline’s sound effects as coming from Half-Life.

The levels are the best part. They tend to be large and a bit heavy on the monsters. There are a lot of different level designers here, and a good variety of level design approaches… if you don’t like one of the levels, try a different one.

I really just want to show off screenshots of Alkaline, but to give them some context I’ll talk a little bit about the levels that these screenshots come from. I’m not going to describe all the levels, and if a level is missing it doesn’t mean that I didn’t like the level… it just means that I didn’t take a screenshot I liked of that level.

Right from the start the level gives you a choice. To your left is a sewer grate, to your right is a ledge leading to the ventilation ducts. The level is nonlinear, but it’s easy to find your way around… every section of the level is different and you won’t get lost. It ends with a satisfying and chaotic set piece battle.

And now we’re in space. The cool feature that Tellus Terminus shows off is the changing gravity. Inside the space station, gravity is normal. Once you step through a forcefield, you’re outside in space and flying around in low gravity.

These screenshots are from 1.0, I think the skybox got updated in 1.1 with some deeper colors to it.

It’s a classic hub and spoke design with a central, crate-filled warehouse and lots of keys that you need to fetch. Of course, it’s possible to escape the main level path and explore the outside of the space station. There are secrets, but the secrets are guarded… aggressively guarded… in fact, the rewards are not always worth it.

This level even features a stealth solution to skip combat at one point. You’ll find an invisibility powerup and then come to a room with four dormant mechs. Since this is Quake, your first instinct is to pick them off one by one while you’re invisible. However, using the invisibility, you can sneak into the center of the room and turn on some lasers that destroy the mechs for you.

Honestly, I wasn’t expecting that from Quake and I didn’t figure out it was possible until afterwards. This battle also features too many monsters with too much health in a small space… to survive, you’ll probably need to pick up the respawning ammo boxes during the fight. It’s just not as much fun fighting bullet sponges.

There’s also a bit of environmental storytelling, which feels rare in Quake levels. You’ll find a laboratory with eight containment pods for eight shamblers, but one pod is broken, the shambler is missing, and there’s a dead scientist.

Dancing in the Golden Sun

One map stands out as visually impressive compared to the rest. You may recognize the style of Bal’s Dancing in the Golden Sun from another one of the author’s works, Tears of the False God for Arcane Dimensions.

The level also breaks free of the traditional “get gold key, open gold door” and “press button to open door” system of level design. Instead, there are various systems you need to turn on or off in order to gain access to different parts of the level.

There is a massive secret area you can access if you get all the circuit cards. Do note that I encountered a bug while playing this level: if you save and reload the game, gravity will be reset to normal.

A classic type of level where you unlock higher and higher areas as you progress.

The map is good overall but I wish that it were faster to get back to the top if you fall. There are one or two questionable parts of this level, like the spiral ramp that belongs in a parking garage.

Some of the most beautiful industrial grunge Quake has ever seen. The slipgate warns you that this level features “brutal difficulty”, which is accurate.

The level is stunning, but I’m not fond of the way it achieves its difficulty level. You’re stuck in cramped areas with lots of monsters, falling hazards, and a very small amount of ammo. The level’s detailed architecture can make it hard to read at times.

Core Meltdown shows the most influence from newer games like Half-Life and SiN. You’re on a mission to shut down the reactor core and you need to shut down various systems using different control panels to do it. The final battle is on the surface in a parking lot. There are cables, wires, and railings all designed with a more realistic bent to them, even though it’s stil recognizably Quake.

Alkaline features a lot of what you’d expect from a modern Quake mod. Grunts, enforcers, and ogres appear in variations with different skins (to fit the sci-fi theme) and with different weapons. It’s okay for monsters to have swords in Alkaline as long as the swords glow in electric blue—they have to be sci-fi swords, of course. You’ll also see enemies making appearances from other mods, like the scorpion from Scourge of Armagon.

I do have some comments on monsters that appear in Alkaline.

This drone attacks you with a laser and will sometimes dive at you with a kamikaze dive bomb attack. It presents enough of a challenge because of its speed and small profile—the dive bomb is the annoying part. Enemies with kamikaze attacks probably should have less health or telegraph their intentions more clearly.

The mega enforcer is a great concept—it’s impervious while its shields are up, but it has to take its shields down to attack. It will thrash you until you figure it out. Unfortunately, the shield seems to fluctuate, like the enforcer can’t decide what it’s doing, making it hard to read. When the shield is down, it’s down for a very short time. To balance its shield, it doesn’t attack very often—and to balance its slow rate of attack, its attack is very powerful. The enforcer could do a better job of signaling when it’s putting its shield down. This might let it be rebalanced to shoot more often.

I have nothing negative to say about the liutenant. It’s my favorite enemy in the mod, with good mobility and a devastating super nailgun attack. It’s used well, in areas where the player has some cover.

The prowler is a mech with a railgun… it has high health and a devastating hitscan attack. However, it doesn’t signal its attack as well as it could. The attack is signaled—it’s just not a very clear signal. Compare it to the shambler. When the shambler attacks, it conjures a lightning bolt between its claws first, which is easy to see.

Play it. It’s a great Quake mod. I’m sure we’ll see more levels for Alkaline in the future, since it’s such a solid foundation. I’m also hoping that some of the monster behavior gets adjusted a little bit.