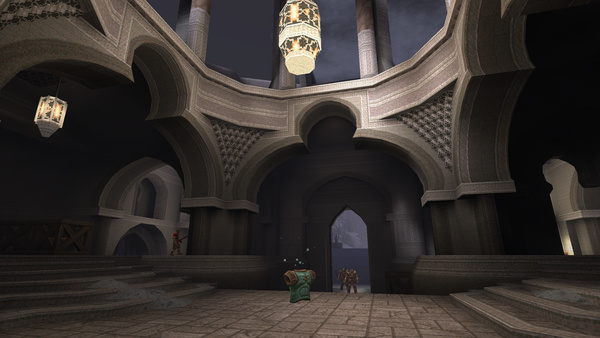 I keep playing Quake because I can’t be bothered to install newer games on Linux. Linux, of course, is the best, most amazing platform for developers but it just sucks if you want to use it as a desktop or for gaming.

Quakespasm is the engine you want. Don’t use DarkPlaces—DarkPlaces looks slick but it doesn’t work right.

The original Quake campaign gets old quickly, so I was pleased to discover that there’s still an active Quake modding community. Arcane Dimensions is a positively massive mod that makes Quake fun again, with new monsters, levels, and weapons. Think of Arcane Dimensions as the sequel to Quake that you always wanted.

Levels are the biggest draw. Arcane Dimension’s levels are massive, beautiful, and expertly designed. When I say “massive”, think of each level in Arcane Dimensions as like its own miniature episode.

Foggy Bogbottom is one of my favorites, and it’s daunting once you start the level. Press Tab and (on Normal difficulty) you’re greeted with the message:

What? It has how many monsters?

The Evolution of Level Design

At the beginning of the Foggy Bogbottom, you drop into a swamp and swim across the level, getting a preview of what lies ahead. You wind through the levels above, encountering locked doors, deactivated elevators, and raised bridges blocking your path. Most of these can be opened from the other side—once you fight through a horde of monsters you find yourself back near where you started, just on the other side of a previously locked door.

Spaces are reused to great effect. You’ll backtrack through an area after picking up a key only to find that the area completely transformed—new monsters are breaking down walls and jumping out at you.

This isn’t just more Quake. This is Quake with 25 years of advancements in level design.

You can see the basic concept in classic Quake levels.

The Grisly Grotto is a classic Quake level, but after getting used to Arcane Dimensions, it just seemed a bit… simple. It’s still a good level. At the beginning, you see the silver key on a platform in the middle of an underground lake. You can’t climb up to the platform, so you dive underneath it, fight ogres and knights, and take an elevator back up. When you make it back to the platform, new monsters teleport in. It’s a formula that works well:

The Vaults of Zin is similar. You start out with the silver key directly ahead of you and a locked door just to your left, but the key gets whisked underground and you have to follow it down.

Levels in Arcane Dimensions use the same formula and take take it farther:

These levels feel less like a sequence of puzzles and obstacles and more like a puzzle that you pick apart one room at a time.

An easy way to reuse space in Quake is to have the player climb up to higher areas as they move through the level.

A few levels attempt to tell a story.

It might not be much of a story, but you’ll find more story in some Arcane Dimensions levels than just “kill monsters, get rune.” Firetop Mountain is the first one I played with a story and to be honest, it was such a surprise to see any story at all.

I’m not going to spoil Firetop Mountain, but I will say that if you haven’t seen the knight and read the books, you haven’t really beaten the level. It’s completely optional! After all, this isn’t modern-style game storytelling with cutscenes, but it’s also more than just scattered pieces of text that you put together.

Arcane Dimensions comes with a slew of new monsters to fight. I don’t know how many. A lot.

Some of these are simple takes on existing monsters. You’ll see variant knights, variant ogres with sledgehammers that slam the ground, or grunts with rocket launchers or flamethrowers. There are also plenty of brand new monsters—I think some of the designs are taken from existing Quake mods, so they’re not all “new” per se. There’s enough variety to fill out the levels and make it feel like you’re not fighting the same ogres, death knights, and scrags over and over again.

The coolest new monsters are the bosses. Quake never really had proper boss fights. Episode 1 had Chthon, but that was just a small set piece battle with a couple buttons to press while you dodge fireballs. The final level had Shub Niggurath, but you were mostly fighting vores and shamblers. All you had to do to kill Shub Niggurath was step through a portal at the right moment. The bosses in Quake were a bit of a let down.

Arcane Dimensions adds a few real juicy boss fights and even gives you better version of the Chthon fight from e1m7. One of the more common boss fights is against massive statues that stomp on the ground and destroy the level as you fight them, like in The Realm of Enceladus.

With all these additions, there are also a couple tweaks here and there to alter existing Quake gameplay.

These aren’t major and you might not notice them at first. For one thing, the shotgun is no longer a hitscan weapon! Shotgun shots take time to travel through the air and you have to lead your target, if only a little bit.

It’s 25 years since Quake came out. Computers are faster and open-source developers have made a few improvements to the engine. Just take a look at one of Arcane Dimensions’ latest levels, Tears of the False God. It doesn’t look like a Quake level.

One minor problem you might run into is that the complicated, beautiful level geometry sometimes gets in the way. It’s not much, but occasionally there’s some geometric detail that makes it harder to make a jump, or the rounded top of a cliff may make it hard to judge where you can stand.

Also note that there are four levels accessible from the start hub that have runes. The doorways that lead to these levels are marked with the relevant rune, if you look closely. The runes themselves make take some work to find.